Described by The Guardian as “a diaristic, near-perfect debut,” Collapsed In Sunbeams is delightful. This new 2021 album peaked at #3 on the charts in the UK and Arlo Parks is merely 20 years young. Arlo Parks is also a poet and it shows in this album as she speaks directly to the listener’s heart and uses aspects of spoken word in the intro song and mingled a little bit throughout. It feels as if she pulled this hit album off without an abundance of intricate production or even one song that gives the sense that she was selling out to land a hit on the radio. Where she does step out of her comfort zone is in the lyrics. Listen closely for pure, unfiltered commentaries on sexual identity, queer desire, mental health, body image and more. Oh, great, another pop album trying to tackle the world’s anxieties, right? Arlo Parks brings a different viewpoint on Collapsed In Sunbeams. The Guardian writes, “Parks writes with a diaristic tone that suggests lived experience rather than a self-conscious desire to tackle the burning issues of the day.” Enjoy the vulnerability and mastery of Arlo Parks on her new, debut album.

Arlo Park’s superpower: Parks has been dubbed a variety of things including a “cinematic storyteller, the “euphonious voice” of Generation Z.” She would brush aside all of that hype. In this Guardian article she states, “I’m just saying what I’m saying and I happen to be 20. Maybe people my age gravitate towards my songs because they can relate to them, but I’m definitely not speaking for anyone.” But what does Arlo Park’s claim? Empathy. She titles herself an “empath” or “someone deeply attuned to other people’s feelings” and that is her super power that results in an album like Collapsed In Sunbeams and as much acclaim as she’s received so early in her career. Go Arlo! 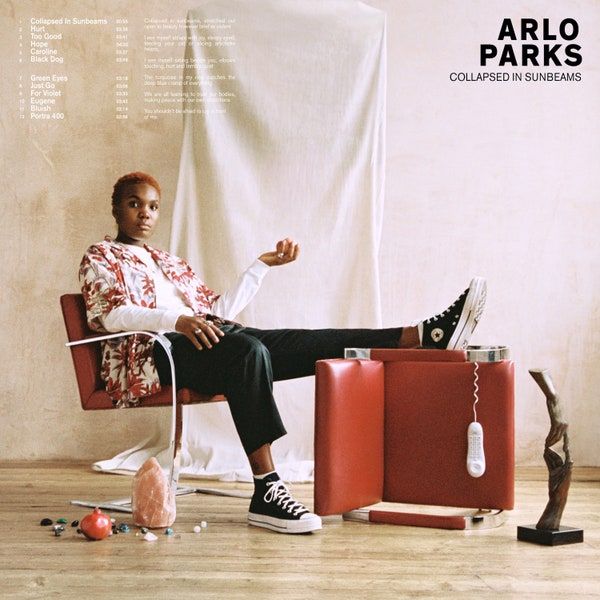