To start, this is not an album you bring home to Dad. This album has scars and tats and tells your Dad you’ll be home by 11 but takes you out behind the mall to smoke weed and skateboard. The Golden Casket is weird, quirky, and experimental… but also kind of metal in a way. The best analogy I can come up with is that if Uncle Eddie from Christmas vacation was an album, he’d be this latest album from Modest Mouse. Jolly and pleasant at times but also willing to kidnap your boss because you didn’t get that Christmas bonus. Anyways, if you’re coming back for some more “Float On,” look to “We Are Between” or “The Sun Hasn’t Left.” If you’re into the tats and skateboarding behind the mall, check out “Wooden Soldiers” or “Lace Your Shoes” and prepare for a trip. Very unique - keep reading below for more fun facts about The Golden Casket and let us know what you think!

Modest Mouse is quirky: According to Pitchfork, early in production of The Golden Casket, Issac Brock (guitar) “pledged not to play any guitar on the record.” He did, in fact, play some guitar on The Golden Casket, but he saved a ton of room for the real star of their new album: percussion. The credits and catalogue for this album are insane. They’ve credited “each musician’s contributions down to their finger snaps because this is the kind of record that differentiates between the sounds of different fingers.” A list of “instruments” that band members play on this album are: “Fun Machine, piano, mini Korg, Crumar, banjo, melodica, vibraslap, spacephone, and “soft drink percussion” (aka a soda can).” Maybe one day I can learn how to play the Fun Machine :(

Top tracks: We Are Between, The Sun Hasn't Left, Leave A Light On 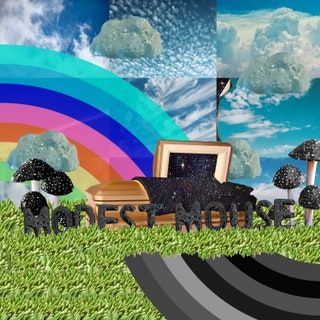